The solution for HD and ultra high resolution video.

“When I first built the set, 16 layers of 1920 x 1080 material running all at once, was a serious tax on my machine. I moved the existing media in to the HAP codec, this effected a huge performance gain in VDMX.”

“The Designer license enabled him to ‘previs without servers.’ He also gives kudos to disguise’s HAP playback and streamlined UV mapping.”

HAP is a set of video codecs for macOS, Windows and Linux that performs decompression using a computer's graphics hardware, substantially reducing the CPU usage necessary to play video. It has become the standard for high performance, high resolution movie playback on media servers, live video performance, and event visuals.

“HAP and TouchDesigner's support of the codec was integral to achieving the complex installations on Covenant and Pacific Rim 2.” 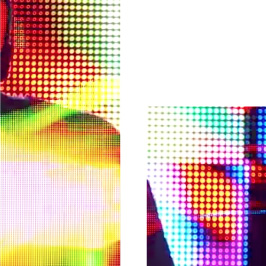 Regardless of the field, artists need to use their movie files in lots of different tools during the creative process. Nobody wants to be locked into a single platform and having to transcode to lots of different proprietary formats to get the best performance is often confusing and time consuming. HAP addresses this problem by providing a free open source baseline standard that is designed to provide a single efficient hardware accelerated playback video format that can be used with most popular media servers, VJ software and creative coding environments.

The HAP codecs are designed to fit the needs of a variety of real-time video workflows where ultra high resolution video is needed such as live event production, set design, 360 video for gaming, projection mapping and creative coding.

Along with the ability to work at extremely high resolutions the HAP codecs also include pro video features like alpha channel support and high quality modes.

HAP is a set of video codecs for macOS, Windows and Linux that performs decompression using a computer's graphics hardware, substantially reducing the CPU usage necessary to play video — this is useful in situations where CPU power is a limiting factor, such as when working with multiple high resolution videos in real-time.

Our benchmarks page shows how HAP compares to other commonly used options and discusses the tradeoffs involved for each format.

Movies that are encoded with the HAP codecs are typically exported into standard .mov or .avi containers just like other video you are used to working with and will playback just like any other file in supported applications. Additionally HAP can be exported to by using AVFoundation, QuickTime, FFmpeg and other standard exporting software making it easy to fit into existing encoding workflows.

Playback of movies encoded in HAP is already supported natively or by 3rd party plugins in over two dozen of the most popular media servers, real-time video applications, and creative coding environments, making it easy to switch tools without transcoding your media files.

The HAP video codecs are open-source, licensed under a Free BSD License.

Everyone can use it for commercial or noncommercial applications completely free of charge.

This project was originally written by Tom Butterworth who continues to maintain the bulk of the development and was commissioned by VIDVOX in 2012. Additional code and financial support has been provided by other developers and partners from around the world since its initial public release in 2013.

We have found that open source code and open standards are especially important for creative communities such as ours where interoperability between tools is often crucial for artists to achieve their visions. We encourage other developers of creative technology and artists themselves to share their low-level knowledge and support the adoption of open standards in their work.

How do I add support for HAP to my software?

If you are already using AVFoundation, FFmpeg, LibAV, DirectShow or QuickTime for movie playback or encoding it is relatively easy to add native support for the HAP codecs to your own applications. Check out our developers page for instructions, sample code and other useful links to get started.